A Brief History Of Acid House - an illustrated book. 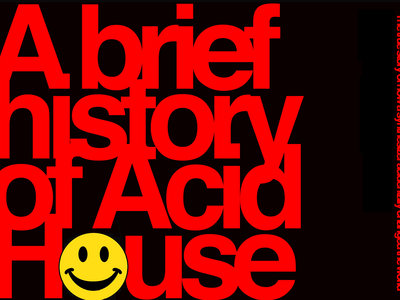 A Brief History of Acid House is an illustrated celebration of Acid House musics rich and colourful history which chronicles the key events and major players responsible for its global influence and on-going legacy.

To mark 30 years since the Acid House scene exploded in the UK, we examine the impact the music had upon club culture and music history.

Also included in the book is a list of essential Acid House classics with descriptions for each with images and a Periodic Table of Dance Music.

About the author: A brief History of Acid House was written and illustrated by Suddi Raval. Suddi Raval began attending Acid House parties in the North of England at the age of 17 in 1988 and has been a life long Acid House enthusiast ever since.

He has released records under various names on different record labels including being co-writer and producer of the UK top 20 hit single Hardcore Uproar which became a Hacienda anthem in the summer of 1990.

He has since scored soundtracks for numerous video game titles and writes a regular column sharing his memories of rave experiences for Iconic Underground magazine.